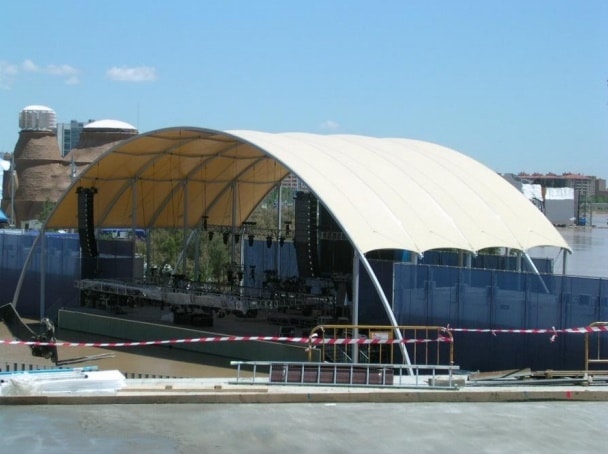 In our daily lives, we often come across examples of architectural solutions in which fabric is used as the main material for the definition and wrapping of living spaces. As you probably already know, this concept is called “textile architecture” and it is gaining strength in recent years due to its luminosity and aesthetics. In this post, we show you a little more about this trend.

Textile architecture is an architectural solution that uses fabric as the main material, both in the definition and in the wrapping of living spaces. The textile structures provide spacious and aesthetic enclosures of great variety in terms of shapes. One of the main advantages of using fabric as a cladding or covering material is the permeability of light into the interior of the structure, which provides high overall levels of natural light to the living spaces located within.

Read More: What is Sustainability in Architecture: 7 elements to consider

Textile structures are of constant thickness and flexible and deformable nature, but require a small number of rigid elements as support and tension to the textile load.

Traditionally, we find examples of textile structures in well-known figures, such as the tents of nomadic peoples or the sails of Ships.

However, the origins of our contemporary technology of textile structures can be found in the 19th century.  As the spinning and weaving of cloth became mechanized after the industrial revolution, large portable tents could be created for the traveling circus tents that were abundant in the latter part of that century.

The basis of its formal and functional design is its structural stability, which requires the maintenance of permanent tensile stress in the material -the fabric-, which can be achieved in two ways:

The shape and physical behavior of textile structures differ greatly from the conventional rigid, “linear-elastic” frame structures used in most buildings. There are three fundamental structural factors in a textile structure: surface shape, prestress levels, and surface deformability.

The majority of contemporary textile structures are based on an “anticlastic” surface geometry, that is, a structure only stressed in traction, without stresses due to bending or compression. It is a set of “arc” tensile elements that act in opposition to a similar set of “hanging” elements, that is, there are a series of upward and downward forces that end at the edge and at the points of tension. subjection. Physically, the two sets of elements represent the two directions of textile spinning. (the warp and weft) inside the membrane. This configuration has a valuable property because it can be fully prestressed without significant changes in its general shape.

Prestress contributes significantly to the stiffness of a membrane because its various curvatures interact to retain what would otherwise be significant deformations. The deformation of the “hanging” curvature due to the different stresses that occur on the structure is retained by the “arc” stresses. The actual values ​​of prestressing used in practice generally represent a small proportion of the ultimate strength of the membrane.

The level of prestressing can also be set so as to prevent loss of stress in both directions, in a particular area of ​​the surface under the applied load. Such values ​​are usually set in conjunction with the shape selection.

Unlike what happens in more conventional building construction modes, deformability is considered a useful and important characteristic of textile structures. In fact, due to its relatively low surface stiffness, both in-plane and out-of-plane, changes in shape are a primary responsibility of the textile structure to externally applied loads, in conjunction with changes in stress distribution by the entire surface. To this is added that the deformations that develop in the material of the membrane are of greater magnitude, in several aspects than for example those of steel.

Consequently, much greater deformations and geometric changes appear in textile structures, under loads, than in conventional frame constructions. The general stability is ensured thanks to the adequate flexibility of the membrane supports, as well as its deformability.

Read Also: Civil Engineering or Architecture: which one is for me?